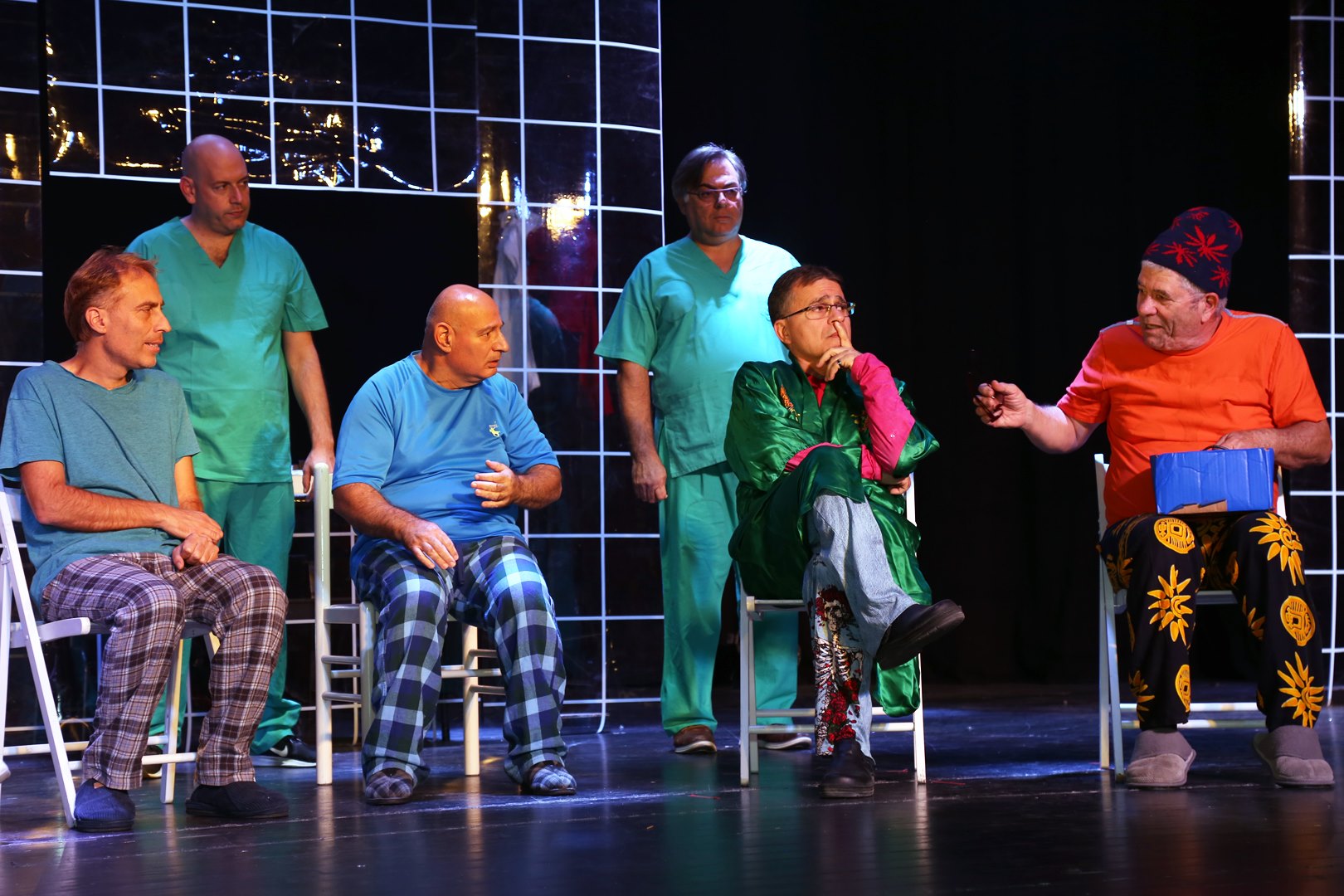 / Tel Aviv / NEVE ELIEZER / ONE FLEW OVER THE CUCKOO’S NEST

We are an amateur theatre group from Israel, Tel Aviv.

The group exists for about 12 years and unites amateur actors of different ages, professions and social backgrounds.

Our group performs different domestic and world plays. We worked in the past with plays of Tennessee Williams, Georges Feydeau, Sholem Aleichem, Moliere and others.

ONE FLEW OVER THE CUCKOO’S NEST

Scene 1
The two aides tease patient Bromden who is deaf and mute and are stopped by nurse Ratched. All patients are called to receive their medication. A short exercising session is led by nurse Flinn. Patients sit for a card game when a new patient – Randle P. McMurphy arrives. McMurphy was sent from a prison to determine his mental condition. McMurphy defies the aides, refusing to take a bath, and befriends the patients who admire his behavior. He tries to talk to the deaf-mute Chief Bronfman, sends Ruckley (Whose only vocabulary is „Fuck you“) to replace his wet pants and gives the group playing cards with porn pictures. Informed by Billy that the principal psychopath is Harding McMurphy declares that from now on he is the „boss“ of all mental patients.

Nurse Ratched enters and confronts McMurphy for being a troublemaker. McMurphy mocks her („If you would ask me to take a bath with you I would have agreed“). When Ratched requires him to obey the institution rules he responds: „Whenever someone tells me to keep the rules I feel like breaking them“.

Scene 2
A new card game is led by McMurphy with gambling, using cigarettes as money. McMurphy tries to enter the nurse station to lower the music and is reproached by nurse Ratched.

A daily group therapy session commences. Nurse Ratched forces Billy to talk about his stammering and his past suicide attempts. Billy who greatly fears his dominating mother breaks down when Ratched quotes his mother saying that she has stopped him from marrying the girl he loved as the woman was a manipulative slut.

Nurse Ratched presents the new patient McMurphy: Awarded For excellence in his military service, but with a long history of drunkenness, violence, assault, gambling, and one case of a rape. McMurphy claims innocence as the girl lied about her age and was more than willing.

Ratched continues with Harding, prying into his relationship with his wife, claiming that he is not manly enough. The whole group attacks him calling him homosexual and pervert. McMurphy stops the attack and compares the group behavior to chickens pecking each other to bleeding, saying that Ratched has started the pecking.

Harding protects Ratched describing her as the best nurse ever, with good intentions, almost an angle, but eventually breaks down in tears admitting she is a bitch. McMurphy challenges the patients to place a bet – within one week he will succeed to get into her bed.

Scene 3
McMurphy sees Chief Bromden stashing chewing gums at the bottom of a chair and offers him a fresh gum. On exit he notes that Bromden, who is claimed to be deaf, has jumped at the noise of his entrance.

Scene 4
The aides refuse to provide McMurphy with toothpaste as according to the rules they do not open the lockers before 06:45. The nurses enter and require McMurphy to take off the towel and dress up. After some argument he makes fun of the nurses by removing the towel, exposing his body and exits. Nurse Flinn is impressed but is questioning the logic of his behavior to which nurse Ratched responds: „Logic? You are in a mental institution“.

Scene 5
Group therapy session stars by nurse Ratched informing McMurphy that a visit of his lady friend „Candy Starr“ has been approved.

McMurphy requests to change the daily program and enable watching of the NBA game on TV. Nurse Ratched objects to any change in the routine but agrees to hold a vote. Due to fear of antagonizing Ratched only two patients dare to raise hands.

A Monopoly game is disrupted by Ruckley attacking Harding. McMurphy stops the scuffle stating he is going to lift an electrical power box, use it to break a window and go to town to watch the game in a pub, inviting Cheswick to come along. The patients make a bet about his ability to lift the box. McMurphy tries and fails, stating „At least I tried“.

Scene 6
Candy Starr visits McMurphy and leaves. Still upset about missing the NBA game McMurphy requests to hold a re-vote. When seven patients raise their hands he is sure he won but nurse Ratched states all eight must vote including the deaf mute Chief Bromden. McMurphy implores Bromden to raise his hand with no success.

When suddenly Bromden lifts his hand Nurse Ratched refuses to accept his vote saying that the vote has terminated.

McMurphy sits in front of the blank TV screen and starts to describe an imaginary game. All patients join the „make believe“ cheering to imaginary players.

Scene 7
The patients play basketball but are interrupted by aide Warren and by Nurse Ratched. In the argument that follows McMurphy is told that while he had only 68 days left in jail, at the mental institution he can be detained indefinitely until they decide to release him. When Harding tells him that unlike him most patients are there by choice and can leave if they want, he is mad at them for not telling him.

Nurse Ratched tells the patients that as a punishment for their behavior TV and card games are banned for 30 days. Then she informs them that one patient has hair lice and should be disinfected. When Scanlon resists the aides McMurphy pulls aide Warren to the floor. Chief Bromden joins him and a fight develops.

Scene 8
McMurphy and Chief Bromden sit tied up waiting for an electrical shock treatment. To McMurphy surprise Bromden starts to speak, revealing he is not deaf or mute. Chief Bromden laments his father who was big and strong until the land development tractors drove him off his land when he started drinking and shrinking until he has died. They hear from outside the wild geese flying freely to the south. McMurphy encourages Bromden to try and escape by breaking the window with the electrical box but Bromden says „I am not strong enough“. The aides enter and take McMurphy to the electrical treatment.

Scene 9
Group therapy session. Scanlon asks about McMurphy. Cheswick requests Nurse Ratched for his cigarettes. When she refuses, ordering him to sit down, he bursts out of control shouting at her. Rebelling against her tyranny he cries to all others to do something about it when the arrival of McMurphy as a zombie stops the commotion. All cheer when McMurphy reveals it was only a gag. Nurse Ratched confronts Bromden informing him that she knows he has pretended to be deaf and mute and requires his apology. When an aide tries to grab Bromden he is tripped by McMurphy. Nurse Ratched tells McMurphy she is going to recommend a lobotomy to suppress his violent nature. McMurphy asks the patients what is lobotomy. They show him Ruckley as an example of what happens to a violent man after the operation and urge him to flee.

McMurphy says that before fleeing he will hold a farewell party.

Scene 10
Candy Starr and Sandra sneak into the institution through a window, with cooperation of aide Williams. All patients drink and dance wildly in the party. When the shy Billy shows interest in Candy McMurphy urges them to go into the „Royal bedrooms“.

Scene 11
The morning after the party. All are asleep except Billy who is missing. Aide Warren brings Billy and Candy from the bedroom. Nurse Ratched requires an explanation calling Candy a cheap slut. Billy, happy after the night with Candy, protects her saying she is sweet and good. When Ratched declares she is going to tell his mother that he has slept with a prostitute he breaks down completely, begging her not to tell his mother and blames McMurphy for making him do it. Aide Warren drags Billy to the office. Minutes later he shouts for Nurse Ratched.

Nurse Ratched returns from the office slightly shocked informing all that Billy has cut his throat. She blames McMurphy for playing with people life as a god. McMurphy grabs her and tries to choke her but is stopped by the other patients.

Scene 12
Patients play a card game and wonder what happened to McMurphy. The motionless McMurphy is brought in on a wheelchair. Nurse Ratched strokes his face saying „Now you are OK“ and leaves. The patients approach. Bromden says: „We can run away together now. I am not leaving you here“. They read on the medical chart: „Randle P. McMurphy, after lobotomy“. Shocked, they say: „It is not McMurphy, it is a puppet“, „The eyes are open but there is nobody inside“.

Chief Bromden says: „Do you think Mac would have wanted this thing to sit in this room for twenty or forty years with his name on it?“. Suddenly he grabs the pillow and chokes McMurphy.

Harding and Cheswick urge Chief Bromden to flee to Canada. He is afraid he is not strong enough but then he succeeds to lift the box and smash the window, escaping the asylum.